Posted on January 29, 2014 by Christine Hendler 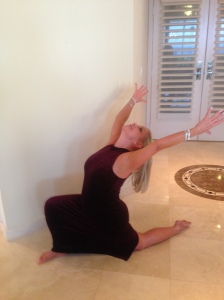 Last week I pretty much felt that God hated me. I had lost trust in a beloved friend and it felt to me that God was giving all good things to anyone and everyone but me. I felt that all my efforts to be a Clarence Odbody, Angel 2nd Class, to my beloved friend had been tossed aside in order to appease a more demanding entity. And, yes, okay, I was certainly indulging in a "pity poor me party" along with my grief at being misled by this friend.

But then, the skies cleared unexpectedly and beyond expectation. Even though my friend had made choices that left me saddened… in other areas I began to see that my dearest wishes to be a human angel were being realized.

In the area of my work which includes hiring and training new hires for my company, I was completely surprised at our annual party by an honor presented to me by our Director of Operations and supervisory staff (all of whom I had hired and trained) in which they expressed their gratitude for my leadership…accompanied by a standing ovation from company employees, almost all of whom I had trained. This was followed by private, individual expressions of gratitude for the ways in which my influence had changed their lives. A "Clarence" moment for me!

Then, in another arena, my dear girlfriend, who is in an abusive marriage, sat me down and told me that the violence was escalating. She had enough courage and trust to tell me this. When I told her it was finally time to explore the path of self-defense, she listened and agreed to allow me to bring her to my tactical instructor to educate her in all methods to defend herself and her children when (it’s not “if” but, frighteningly, “when”)the situation escalates. She also allowed me to provide her with the means financially to escape. I was able to be a “Clarence” once again!!

Which brings me to this day. I had asked a friend, who is also an incredible horsewoman, to give me some lessons in the finer points of physical communication with a horse, in anticipation of my upcoming retreat, “Literature and the Landscape of the Horse” with author Page Lambert. What I didn’t know is that due to many circumstances in her life, that precious horse was beginning to lose weight and needed some care that was beyond her means to provide, since the woman who had previously been “leasing” the gorgeous creature had had to stop. Enter Clarence Odbody, Angel 2nd Class! I grabbed the opportunity to be a “fairy godmother” to the beautiful horse, Serenity, because, after all, this is my ultimate mission when I create my sanctuary in Texas for horses, humans and any critter needing care. What a perfect beginning!

God doesn’t hate me after all :)! I have been presented with many more opportunities to serve and be a human angel. Even though I experienced crushing disappointment and grief at my beloved friend’s decisions, I realize, at least, I was able to “Clarence” this person into having a few precious months of their daughter’s senior year of high school. That is an ongoing joy for me!

This entry was posted in Life Mission, Personal Growth, Spritual Evolvement and tagged angels, Horses, It's a Wonderful Life. Bookmark the permalink.

notes from a dog walker

stories from the sidewalk

Sacred Sounds by John - The Art of Listening

Inspiring confidence and courage in people

BeautyBeyondBones
Letters From The Clouds

Welcome to the world of cats!

The witterings and observations of an ageing 25+x year old

Insights into the Journey of Life...

Take a Ride Inside...

Blessed with a Star on the Forehead

As I navigate through this life ...